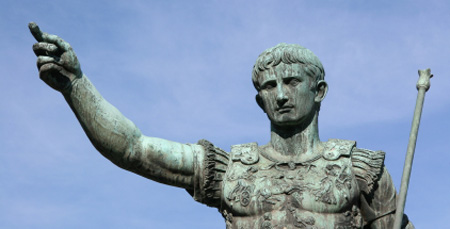 Could you imagine if God told the Israelites to use the laws in the Roman tax code to pay for the Levitical service in the temple? I’m sure a lot of objections come to mind right now. here are a few of my objections:

Using the laws in the Roman tax code to pay for the services of the Jewish temple seems ludicrous. But, as bizarre as it may seem, the Church today is financing it’s ministries in this same bizarre fashion. We are using two separate statutes that are incompatible with one another to either govern or finance Church ministry. The Church body uses the Holy Spirit as our guide and our counsel. He is responsible for ordaining evangelists, teachers, apostles, and prophets; and yet we use a different tax code to pay for the service of these offices.

The tithing law does not know how much resources are needed to run Spirit led operations.

Let me give a practical example. The U.S. Constitution delegates specific powers to our government. So naturally, our constitution delegates funding for it’s own operations. We couldn’t use the financial data from European laws to pay for U.S. government operations. So, how can we use tithing laws to finance the operations that the Holy Spirit has delegated? Tithing has no ability to predict the amount of resources that the Holy Spirit needs.

Also, what better way to confirm that a ministry was  called by the Holy Spirit, then by the same Spirit calling us to give to support it?

Let’s just hypothetically say that in the Old Testament, Roman laws distributed a tithe proportionately to 10 levitical districts. What influence would the Levites have over these Roman laws if they felt a change in finances was necessary? The Levites do not have any authority over the Roman government, let alone any of the benefits of Roman citizenship. The needs of each levitical district varies year after year, but the Levites are stuck with the proportions delegated by the Roman laws.

Today, the Spirit led church has no influence over where their tithe must go. You may think that my claim is biased since the church leaders distribute the tithe and offerings after each Sunday. But I’m not talking about what Church leaders do with what others have given. I’m talking about what you do with what God has given you. You and I are the Church. Pastor Bob and his staff is not the entirety of Church operations.

According to most tithe teachers today, our tithe belongs in the local church storehouse. So, if we were to give our 10% anywhere else besides the local church, then we would be in danger of putting ourselves under the Malachi 3 curse. In some cases, our extended family could use some help with groceries this week, but choosing where our tithe can go is not our decision to make. We have no authority to change where the tithe must go, because neither the Holy Spirit, nor your ambitions have no authority to change it.

Even though Christians are to be led by the Spirit of God, what tithing really means is that once you’ve achievedthe minimum guidelines and standards, you are finally free to be Spirit led. Until then, you are under the authority of something other than the Holy Spirit.

Both the Old Covenant, and the New Covenant operations have different duties to fulfill

I’ve already stated that tithing was used to support the Levitical system and a type of priesthood that does not exist today. Tithing financed the duties of Levites in the Old Testament who held governmental positions, couldn’t own land, were guards, and also treasurers of the cities. The tithe in the Old Testament was their government welfare system and also funded multiple yearly festivals. The tithe did not pay for any salaries, nor did the tithe did not go towards any buildings or programs.

There is no way that tithing could have been integrated into a completely different New Testament system without any instructions in the bible on how to modify or migrate tithing into the Spirit led Church. The new testament Church is not the old testament system donning a new costume; so why should tithing be slipped under the cloak of the New Covenant legislation?

In the Old Testament, worship for the Israelites, Levites, and Priests was instructed through the Law. There was no question as to who was to serve, where you were to serve, and how long. This systematic worship, and governance made it quite simple to use a tithe to finance these straight-forward instructions. If the new covenant had laws that dictated who the ministerial class was going to be, as well as where and when they served; then i could see no problem with implementing a systematic way of financing that legalistic operation.

In the New Testament, because we all participate in the operations of priestly worship, our duties are not clear-cut for us. We are all given gifts that differ according to the delegations of the Holy Spirit. Since we all have duties of the priests, there is no Levitical class, there is no priestly portions. We do not have instructions written on who is to serve, how long, or where. The Holy Spirit is spontaneous, and radical. But please take note, that we have the responsibility to develop plans and create order. Spirit led giving is not the presence of anarchy and chaos.

The Holy Spirit and tithing are just incompatible

You cannot use water to fuel a combustion engine, and neither can we expect tithing to fuel the Spirit filled Church. The restrictions of tithing make it impossible to coordinate with the spontaneous and radical movements of the Holy Spirit. You cannot expect a dead, static law, such as tithing, to be fully compatible with a living, spiritual organism.

God’s children are born of the Spirit, so the letter of the law is dead. Nothing screams “letter” more loudly than prescribing a mathematical formula for our worship towards God. Seriously, what other aspect of our worship are we obligated to perform a minimum standard? Name me one – praying, serving, preaching, witnessing, attendance . . . ? Also, name me one spiritual gift, besides giving, where there is a minimum standard attached to it? Could tithing be any less discreet about it’s form of legalism? Tithing IS the definition of legalism! The letter and the Spirit do not mix.