You are here: Home / Books on Tithing / Giving & Tithing by Larry Burkett 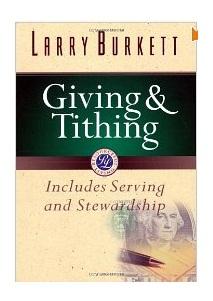 I just read a blog about someone mentioning that Larry Burkett’s book – Giving & Tithing is not very deep. I don’t believe in a tithe minimum or a mandate to tithe, but i do believe in sacrificial giving. I know that sounds somewhat vague, but really is making a sacrifice actually vague? Anyways, it really doesn’t come to much suprise to me that Burkett’s book about tithing is not that a very deep one. There are too many questions about tithing to completely dig into without getting in a tangled mess that won’t make sense.

All of the OT practices have a deep spiritual meaning that have been fulfilled by Christ, but when you dig deep into the topic of tithing you start asking the question, “why did the law of tithing change for the church if there was no command to”. This is what happened to me. A friend told me that tithing is not for New Covenant believers, i went on a personal bible study to “prove him wrong”, but in actuality, when i started digging deep into the topic i was more than convinced otherwise. I think what the argument comes down to is did Jesus fulfill tithing to abolish it or confirm it? Then ask yourself is tithing consistent with Spiritual laws of faith and mercy or physical laws of circumcision and blood shed sacrifice.