Home / Articles / Books & Publications / Tithing in the Age of Grace 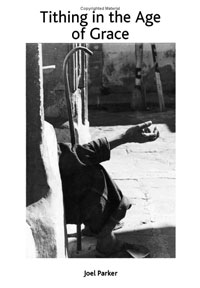 I read the book, “Tithing in the Age of Grace” by Joel Parker. Most of the book was filled with the scriptures that dealt with tithing, but did not include as much application as much as other tithing books I have read. In one of the sections a scripture passage covers 10 pages of the 117-page book. It is also written in large print with the border taking up much of the room. Suffice it to say, for those of you who enjoy reading shorter books, this is the one for you. I read through it pretty quickly.

I’ll get right into this review with a quote from the book,

“He [Abraham] tells the king of Sodom ‘I will not take anything that is yours‘ demonstrating that what he gave to Melchizedek didn’t actually belong to him.”

Most people use Abraham’s example as proof text for tithing, but Abraham did not gather any increase from the spoils of war, because he gave it all away. He also acknowledged that it was the king of Sodom’s stuff anyway. Abraham said, I will not take anything that is YOURS.

“Now look closely at Malachi 3:5b. Who does it say ‘the Lord will come near for judgment’? It says ‘Those who exploit wage earners, and widows, and the fatherless, and those who turn away an alien (or stranger)’. Did you see what I saw? Who is noticeably missing from Malachi 3:5 that is otherwise included in Deuteronomy 14:29 and Deuteronomy 26:12,13?
That’s right! The Levites are missing. They are not in the list of people being exploited.

What was actually happening in Malachi 3 is that the Levites/religious leaders were exploiting the poor. These leaders were in charge of distributing the food that came in from tithing. Does this sound familiar to the operations we see today in the Church? Is there no wonder why Barna’s tithing study points out that many people are diverting more of their funds to charitable organizations rather than the church?

Maybe the lack of funds for the church today is a passive way of us telling our leaders that they are not doing their job. Their job isn’t to make me comfortable, or to have great coffee for me, or to build internal church programs that only help the ones inside, or to have an exercise room for me, or to have a great sound system for me, or to have a great preacher and worship team to help my experience. Outside of taking care of our minister’s needs, it seems that everything we’ve done inside the church is extremely self-serving. Why should I be convicted about serving the desires of my family, and in the meantime be justified over giving back to myself at Church? Instead we staple God’s tag onto the internal dreams of our church, and in the same sentence rip out the “American dream” out of the hearts of families. Is there a difference between the church’s dream and my own? There is none, besides the fact that we’ve sanctified the one dream and made the other unholy.

Anyway, there was more in this book than what I’ve quoted above. Most of the other stuff i have already been mentioned. I would give Tithing in the Age of Grace 3 out of 5 stars. It’s not that it’s got the wrong view or bad content, it just that there’s really not much new content in there. I really don’t enjoy a book loaded with arguments that are speculative, and there was a lot of that. For instance, Parker points out that Jesus never asked for money even though he had plenty of chances. Yeah, Parker is right, and no I’m not against speculation, but with a book that had very little deep discussion on the issue, speculation is not a weapon he should be using.

Has anyone read Tithing in Age of Grace? If so what are your thoughts? If not, what’s your input about this discussion?