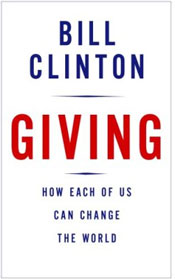 When the Church and its pastors can’t convince people to give, leave it up to pastor Bill. This is the new book by Bill Clinton entitled, “Giving”. Its subtitle is, “How each of us can change the world”. You know what’s interesting is that the title of this book sounds much like a title many of the self-help mega-church pastors would come up with. Actually, I’m sorry, correction, I just caught myself. I did say “self-help” pastors. This book is about giving to others. It is not about self. So I think Bill Clinton is one notch above the selfish help pastors.

It interested me to write about this again because of the tax returns that had surfaced showing the giving records of the Clintons. It somewhat amazed me that his giving had been below the tithe. I don’t understand a person who writes a disciplined book about giving but is sitting on 99 million after only giving 10 million. For some who don’t know, Bill Clinton grossed $109,175,175 and gave $10,256,741, which is just below the 10% mark. You know what another amazing thing is his book income was, $29,580,525!

How can you only give 10 million back when you claim to write an authoritative book about giving? Hopefully, people don’t feel like they were tricked into buying this book. I’m not a supporter of the tithe minimum when it comes to giving, nor am I a person to talk about how much you are supposed to give, but if you are going to teach others how to give please do not rest your behind on 99 million and write a book that makes you look like a sacrificing philanthropist.