You are here: Home / Books, eBooks, & Publications / Beyond Tithes & Offerings 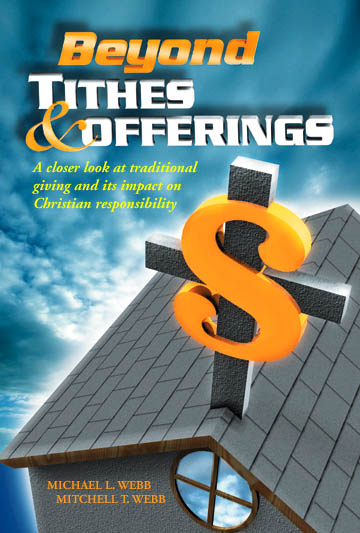 I just finished the book, “Beyond Tithes & Offerings” by Mitchell T. & Michael L. Webb. Truthfully, i don’t know where to begin in my review of this book because i gained a lot from it. I guess i will point out the topics of tithing that i believe they explained well.

Tithing and usage of money

Beyond Tithes & Offerings did a good job defining the tithe and explaining the usage of money.

Tithes and offerings were never based on finances. The currency of the world changes, but animals will be animals, and crops will be crops. People become poorer or richer, but a ram is still a ram, and a dove is still a dove.

The so-called financial situation cannot change the genetic make-up of the herd and flock, the grain from the soil, or the fruit of a tree. The sacrificial items used for offerings, and the materials given for the tithes, remain the same throughout the Bible, whereas the standard for money and its value has changed.

For those of you who are wondering how this quote is pertinent; well it directly relates to the passage in Leviticus 27 that explains how the tithe consisted of food not money. Of course, in today’s society we’ve converted the tithe into currency. The importance of tithing consisting of food is that the substance, size, or type of food doesn’t change. When tithing animals or grains it is simple to just count each one and donate the tenth to God. But with money, it’s not easy to determine how much you should give. How do you factor in your losses, or social security, or gifts, or a slew of other factors that would cause you to re-calculate your tithe over and over and over again if it were money?

Numbers 18:29
‘You must present as the Lord’s portion the best and holiest part of everything given to you’ . . .

If the tithe did consist of money, then what is the ‘best part’ of money? Spending it? With true tithing, one can identify the best of the produce, but the best part cannot be identified when using money.

Um, oh yeah! Good Question. What is the best part of money?

Probably the number 1 quoted passage is malachi 3 when defending the tithe. Most people quote it, “bring the whole tithe into the storehouse, so that there may be meat in my house”. Of course they interpret “storehouse” into “church” and “meat” as the “word of God” The authors of Beyond Tithes & Offerings take the interpretation and re-phrase Malachi 3:10 to read exactly how people interpret it.

Malachi 3:10
Bring 10 percent of your money into the church, that there may be the word of God in my house.

It’s just plain ludicrous to think that money must be deposited in order to withdraw the word of God.

Giving in the New Testament

Beyond Tithes & Offerings does a good job of taking of not only refuting the tithe but also highlighting the way we should be giving in the New Testament. It does no good to destroy the tithe without emphasizing the true solution for the Church to follow.

The less fortunate must usually wait until some pre-determined day to receive help, such as a holiday. People, including Christians, come out in groves to participate in helping the needy and the homeless, all in the spirit of a particular holiday. Unfortunately, some Christians are programmed to wait until they are moved into action by the holiday spirit. Consequently, they are not moved into action by the Holy Spirit. Christians should allow the Spirit to lead them to give according to their means. Then they will perform the level of holiday giving every day of the year. The world would then finally get a glimpse of true Christian giving and the kingdom of God on earth.

This methodical type of giving is completely disgusting. Our way of giving to our God is no different than how the pagans give to their god. Yeah, that’s right! I said it! We give just like pagans give. We give as if our God were dead and could not speak to us. Sure, go ahead, give your offering above the tithe, but i betcha, I BETCHA! most of you are giving 11%, if you are daring, maybe 12%. How would i know? I would know, because that’s how i used to give.

I knew what it was like to calculate my tithe, and then figure 1% or 2% extra. Yeah, yeah, go ahead rant and rave about how at least it’s above and beyond. I look back at that, and can’t believe that i actually gave like that. It’s so pathetic because a two year old has more independant thinking than i did.

Anyways, i could write a lot more about the book. I have personal notes written to myself, but they would not make sense to a majority of you (if i re-read them, they probably won’t make sense to me either). I would definitely recommend Beyond Tithes & Offerings to anyone who is interested in understanding the truth about tithing.