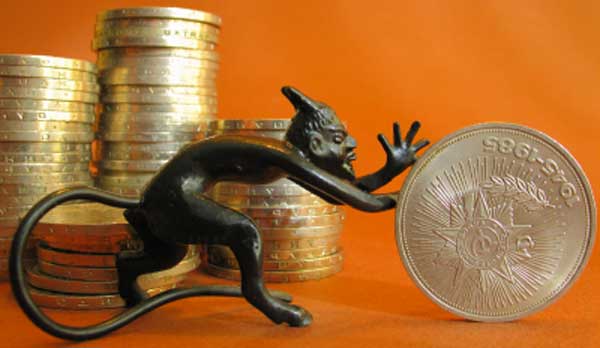 If you believe in the doctrine of tithing and aren’t offended by the title, perhaps you should also read my previous post – “Tithing is for Sissies“. But before you tithing holy-rollers start bible thumping on me, put away your oversized, Scofield, leather-bound, red-letter edition, KJV bible. Here are a few reasons that should convince you heathens to stop your pagan, tithing rituals.

Tithing is for Pagans Who Worship Dead, Deaf, & Mute gods

We say that our God is alive, but we give to Him as if he’s dead.
Any religion can develop monotonous rules that promote giving. But Christianity is supposedly unique since we have a direct relationship with a living God. We also claim to possess the intuition to hear our God; but we continue giving in a systematic, repetitive way as if we have a God who is both deaf and mute. In this regard, We might as well chisel out stone statues and worship our god like every other religion.

Stone statues don’t communicate with their worshipers and make requests. Every religion develops their own way of worshiping their god, and Christianity follows suit in the same manner with our type of giving. We are given the opportunity to entertain requests made by the Spirit of a living God, but instead, we want to be led in the same way that pagans are led. We’ve developed ears that cannot hear, and replaced our God with stone lips that do not speak personal instructions. Monotonous, calculated giving is the method of pagan worshipers whose God is dead, deaf, and mute. Dynamic, radical, and romantic giving is proof of a living God.

1 Thessalonians 1 for they themselves report what kind of reception you gave us. They tell how you turned to God from idols to serve the living and true God

When I see the plate passed around in church it is much like watching people bringing flowers to a gravestone.
All cemetery visitors come with the same gift in hand because it seems to be the universally accepted gift for someone who’s been dead to us all week.

Next time you pass by the cemetery, take time to notice the hundreds of flowers laying out for the dead. Do you see jewelry, clothes, a watch, shoes, vacation tickets, or a pedicure coupon? No. Because giving flowers, just like everyone else, is the only way we know how to express love to a person who is not part of our lives like they once were. We don’t know what they want, nor have we been in touch with them to even instinctively understand what they desire. This is because they are DEAD! Our relationship with a dead person is one-sided. We can talk to them, but they don’t talk back. This sounds a lot like how Christians want their God to be. We want him to hear us when we need something; other than that, we hope He stays dormant to prevent something radical from affecting our comfy lives.

A living God may spontaneously ask us to give sacrificially which is why pagans prefer their God to be dead. With tithing, our calculations allow us the opportunity to protect our most valued treasure from being sacrificed. If our God is dead, then we should continue the same pattern of giving practiced by all the other pagan cultures. But the effects of a living God is demonstrated through dynamic, or random, or spontaneous gifts that reflect a unique and intimate relationship.

2 Corinthians 6 And what agreement hath the temple of God with idols? for ye are the temple of the living God; as God hath said, I will dwell in them, and walk in them; and I will be their God, and they shall be my people.

A business charges for its services and a government imposes taxes, so why shouldn’t the Church use tithing to support its own infrastructure?
Most believers operate the Church as a form of one of two entity’s – either a government or a business. The reason we believe tithing is crucial to Church infrastructure is because only a fanatic group of people would financially support a business or the government voluntarily. From our bureaucratic experience, we feel that taxes need to be imposed to pay “administrative” bills; and from our capitalistic experience, we don’t offer services unless we charge for them. At one point, the tithing model was beneficial for Israel. Their religious system was their form of government, and later on, with the adoption of a monarchy, tithing was integrated into their civil form of government as well.

I’m thankful to be in a country with such an entrepreneurial spirit, but the Church is not a business, and neither is it a form of government. The closest structure I can relate it to is a family. We don’t charge taxes in a family, and neither do we charge our services.

Matthew 17 And when he had come into the house, Jesus anticipated him, saying, “What do you think, Simon? From whom do the kings of the earth take customs or taxes, from their sons or from strangers?” Peter said to Him, “From strangers.” Jesus said to him, “Then the sons are free.

We use tithing as if it’s dues to pay for our country club.
If you think I’m being ridiculous claiming that tithing is for pagans take a look at this article by the Northwest Indiana Pagan Association talking about using tithes to fund their organization. Tithing doesn’t resemble a born again, Spirit-filled individual. An individual who practices sacrificial, non-obligated giving is true evidence of an individual influenced by the example of his Savior. Just in case you think pagan tithing is just isolated to this one instance then look also at this website, and also this one.

The evidence shows that we don’t want to act like a group of Jesus followers. We want to act like a hedonistic, pagan, cult. If we say we follow Jesus, then, by all means, let’s do what Jesus did. Let’s give sacrificially, freely, and without compulsion. Instead, we’ve put our faith in carnal ways to pay the bills instead of using spiritual methods that require more faith. Pagans don’t have any other ways to motivate their giving. They don’t have a living God that gave them an example to live by. Neither do they possess the Holy Spirit to confront them about their giving. All they have to rely on financially are taxes, dues, and fees for their services. We have a way of giving that no other religion can rely on, and yet, here we are trying to copy the pagans.

If you heard a story today of people sacrificing animals in a religious ritual, you would automatically classify them as a bunch of satanic nut-jobs. Yet, this practice, at one point, was done by God’s people. In the Old Testament, holy men were slicing the throats of lambs, burning them in fire, and actually smearing the blood on their house! If we saw this being practiced today, you wouldn’t hesitate to call this person a pagan, would you? Of course, we know Christ was the final sacrifice, and he paid the price so we don’t have to; but it seems that the only price he forgot to pay was the tithe.

Tithing doesn’t belong in the Church any more than slicing the throats of animals and spreading their blood,
but unfortunately, tithing apologists attached it as a rider to the New Covenant practices. Of all the many Old Testament laws in the bible, tithing is in the forefront of the adoption list. With mankind’s propensity to lust for mammon, I can understand why there are a few advocates for circumcision and just a few foes of tithing in Church leadership. Our spiritual enemy recognizes our weakness for riches, which means if the Church were to incorporate any one of the Old Testament rituals into Church practice, tithing would have the best chance of going uncontested.

Galatians 4 But then, indeed, when you did not know God, you served those which by nature are not gods. But now after you have known God, or rather are known by God, how is it that you turn again to the weak and beggarly elements, to which you desire again to be in bondage?

We use tithing like a charm hoping to ward off a magical hex that God could place on our finances.
It sounds like a bunch of tribesmen tossing tribute in the mouth of a volcano to appease the earth god. We’ve all heard that tithing protects us from this mysterious curse. What you may not have heard is that this curse was attached to the Old Testament laws that are fulfilled. There are many people, including myself in the past that have been constantly paranoid about this curse. It’s at the point where if your car breaks down, you blame it on that one time 15 years ago when you missed the tithe that Sunday.

You want to talk about paranoia, then speak to one of those people who rant about how they immediately withdraw God’s tithe when they get their paycheck. It’s as if their life depended on it, and for many of them, they believe that it does. Did God really intend our relationship with him to have paranoid responses like that?

One of the ironic things is that Israel didn’t give a tithe from the first of their harvest, nor did they give the best of the tithe. The tithe was given at the same time the rest of the harvest was gathered, and there wasn’t any quality control. Yet, we are so concerned about the wrath of God spewing volcanic ash, that we immediately write a check to God and make sure he doesn’t get anything less than the best. Even though Israel didn’t give the tithe from the first or the best, we act like a bunch of barbarians who overreact and overcompensate so a mythical, volcanic god does not question our allegiance.

I’m all for presenting God our best since He deserves it, but the former approach to God is unbiblical which means our relationship should not resemble that.

Some of you may think you believe we have Jesus’ sacrificial example, but you truly don’t believe that is a reason for people to volunteer their assets. Otherwise, you wouldn’t enforce tithing.

Acts 8 Peter said to him, “Your money perish with you, because you thought that the gift of God could be purchased with money! 21 You have neither part nor portion in this matter, for your heart is not right in the sight of God.

Do you know what confuses me? It’s that we rely on small group leaders, pastors, evangelists, teachers, missionaries, and deacons to voluntarily offer their time and talents to serve God, and yet we lack the confidence that God’s Spirit can prompt these same people to voluntarily offer their treasure. Although tithing is a form of giving; you need to realize that tithing is also a form of receiving, and it’s those who receive that I have the most problem with. You can call them pastors, bishops, cardinals, popes, deacons, elders etc . . . but their tithing rituals are no different than the rituals of witch doctors, the wizards, and satanic leaders of any cult.

Luke 16 No servant can serve two masters: for either he will hate the one, and love the other; or else he will hold to the one, and despise the other. Ye cannot serve God and mammon.