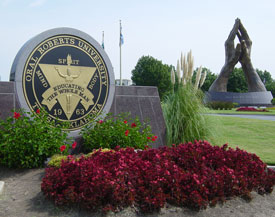 Lots of scandals going on in the Church lately but here’s the latest news written by Justing Juozapavicius in the Associated Press – “Embattled Oral Roberts President Resigns”. The link to the news article is here. There were allegations brought up a few months ago that Richard Roberts, the president, had used some of the University’s funds to support his lavish lifestyle. Some of the allegations brought forward are, “a $39,000 shopping tab at one store for Richard Roberts’ wife, Lindsay, a $29,411 Bahamas senior trip on the university jet for one of Roberts’ daughters, and a stable of horses for the Roberts children.” I’m one of those people that think our leaders deserve a bountiful reward and compensation, but i gotta tell you, 29,000 for a Bahamas senior trip, and a 39,000 shopping tab at only one store? I hope they were just shopping for a car.

It’s bad enough that Britney Spears is in the news for her shopping habits let alone a Christian evangelist. I’m glad that the faculty and chair members had enough guts to stand up for what’s right. This extortion of charitable funds in order to support lavish lifestyles needs to end inside the Christian community. I have nothing wrong with Christians having money, just don’t hoard it all. There’s just something wrong with a Christian group calling themselves a charitable organization, when the presidents and directors are living a life of luxury in the top 1% of the world. It’s practically an oxymoron to say that they are a charitable organization but yet, their biggest charity is to themselves.