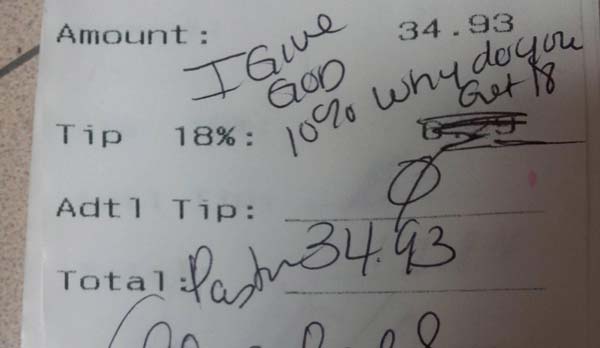 Update 1/31/12 7:37pm: Pastor gets waiter fired after he calls up the manager and complains about the posted receipt. The ‘pastor’ has been identified as ‘Alois Bell’ from (take a deep breath) ‘Truth in the World Deliverance Ministries Church’. According to the Gawker website, she stated, “My heart is really broken . . . I’ve brought embarrassment to my church and ministry.” Accoding to yahoo, Alois Bell told the “manager at the St. Louis-area Applebee’s that the ensuing firestorm had ‘ruined’ her reputation”

After being fired, I think it’s interesting what the server said, “I’ve been stiffed on tips before, but this is the first time I’ve seen the Big Man used as reasoning.”

Welcome to the world of pulpit pimps. They use the ‘Big Man’ every day to banter people about tithing. They threaten everyone with the curse in Malachi 3 if they don’t comply. They abuse the power of the ‘big man’ every day to coerce and banter widows, single parents, and servers.

There’s so much out on the internet, so who can verify this? Anyway, A popular post on reddit shows a waiter who posted a receipt. As you can see, alledgedly a pastor complained to waiter about giving 18% for a tip and only giving God a 10% tithe. If i was the waiter, i’d say, i’d gladly take 10% off your gross income if you wanna tip God 18% of this bill.