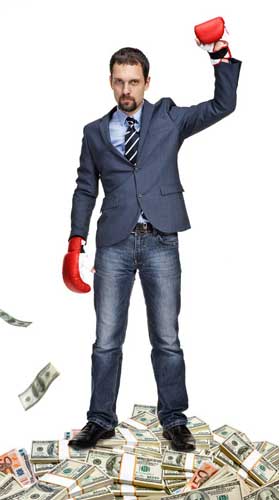 Don’t get all self-righteous on me. I know that it’s not really a battle or a game to debate God’s word, but being right is fun, is it not? Who wants to be wrong? Also, who wants to spend hours debating in order to force the opposition into submission so badly that they finally say they were wrong? 99.99% of the time, your opponent will never admit defeat in the debate. So, to save yourself some time, and to give you satisfaction from your debates, I present to you some reasons to know how you’ve won a debate on tithing (for that matter this goes for any debate about doctrine).

1. They Attack Your Character

Part of my motivation for writing this article is because for the zillionth time when I thought a person would be interested in debating tithing with me, they’ve resorted to name-calling and character defamation. I can’t begin to tell you the number of times I’ve been called a liar, thief, selfish, arrogant, and prideful. Even before they utter a word of scripture on the debate topic, your opponent sometimes will make it personal from the get-go. More than likely the cause of this is that they are unprepared to even engage at all. They probably have zero knowledge and in the back of their minds realize that they don’t even have a sure answer as to why they do what they do.

When a debater feels they are cornered and are out of ammo, they will almost always attack you. Our human nature is an easy target and they know that. They also know that it’s impossible to defend your innocence against character defamation. No one likes the feeling of being trapped in a corner. Most of us don’t know what to do besides go berserk.

How Do You Counter This?
Admit that you are fallible and then use words and examples of a reputable character they cannot attack.
Example: I apologize if what I said sounded rude, can I show you the actions of Paul, in 1 Corinthians . . .

There’s a lot of ammo against tithing. There’s probably 20x more verses, examples, and evidence you could use to dispute tithing than there is to support tithing. You will find twenty-times more websites against tithing than you will for it. You will find twenty-times more books as well. On top of all this, the materials you do find to support tithing, you will see that the content is meager compared to the amount of content in anti-tithing literature. For instance, Larry Burkett wrote a book in support of tithing; but it was a small, pocket-sized book with sixty pages in larger print. That’s it; that’s all he wrote.  On the other hand you’ll find numerous full-sized books including over 150 pages of content that refute the tithe.

After debating tithing for a while you’ll hear the same old arguments over and over – Jesus taught tithing, Abraham tithed before the law, the tithe is the minimum, God never changes, the Church is a storehouse, etc. I keep refuting this argument over and over. It’s not like I’m recycling my comebacks either. Actually, I use multiple examples and multiple verses to discredit their arguments. But of course, they keep coming back with the same old stuff as if what the bible said didn’t matter.

How Do You Counter This?
It’s borderline insanity to keep addressing the same things over and over again, so try asking questions back, don’t repeat your answer otherwise it will be a boring cycle that goes nowhere.
Example: I understand the significance of tithing prior to the law, and I already touched on that some, but can I ask you about why other laws before the law are not required?

3. They Change the Subject

Your opponent starts attacking other controversial subjects that they feel strongly equipped to debate. For instance, I may be in a debate about tithing with someone who knows very little about the subject of money in the bible, but because they know so much about the rapture, they may try to go down that rabbit trail. How it happens is that they somehow find some bizarre correlation between two separate topics and relate the two through some sort of transitional statement.

How Do You Counter This?
Keep going back to the main topic. Don’t give up. Overall your goal should be plant a desire in them to study tithing more.
Example: That’s a great point about the rapture, I need to study that topic more. So why do you think Paul never encouraged tithing in the New Testament?

4. They Soften their Opinion

We’ve all been in a situation where we went too far with our opinion. I consider myself a very opinionated, outspoken person, so I frequently inject my opinions in debates as if they were as undeniable as gravity. But because I have more zeal than facts, I find myself retracting a lot. A pro-tither’s position may evolve from – “all non-tithers are stingy, greedy bums that want to rob God”, into something more objective such as “they may love God, but their doctrine is wrong”.

Here are some more examples of extreme opinions:

You might have noticed that one of the qualities in an extremist is the ability to use absolutes, such as ‘all’, ‘none’, ‘completely’, ‘everyone’, ‘all the time’, ‘never’, etc. This retraction proves that they entered the argument clouded by emotions. Their emotion does not negate the actual facts though.

How Do You Beat This? (LOL get it ‘beat’?)
You don’t want to beat a man when he’s down. He’s already headed in the right direction. We just want to help him along. But just in case he doesn’t soften his opinion, all you can do is state an example to help him retract
Example: I think, naturally all of us have to fight our flesh in order to give sacrificially. My beliefs about giving have convicted and challenged me to give more than I thought was possible.

5. They Start Using Testimonials & Experiences as a Defense

This type of person tends to argue from their experiences rather than from the facts. For instance, they will describe how they were once poor and ever since they began tithing, God has blessed them abundantly. Another good one is that they had no money to cover bills, but they trusted God and gave their tithe, and the next day a check arrived in the mail with exactly the amount they needed to cover their bills. I don’t want to negate the hand of God in all these situations, but I also want to be clear that God blesses people on the amount of their faith, not the amount in the plate.

Arguing against experiences and testimonials about tithing is difficult because it’s not like you can just say they are lying. How do you debate when someone tells you that God turned their lives around when they started tithing? Are you supposed to say that they are deceived? How can you prove that their experiences don’t prove tithing? It’s impossible, and they know that. That’s why they resort to this tactic when they feel defeated.

How Do You Beat This?
Probably the best way is to acknowledge their tithing testimonies and experiences as powerful and influential, and then share some of your own as well. You don’t want to one-up them, but you do want to show that God is moving on your behalf as well.
Example: It’s great to see what God can do when we exercise a little faith. God has blessed me so much on my journey and I have never been more excited to give than I have ever been in my life.

Let me help you out with a tip on how to win a debate – never try to win it. Since winning a debate does not make you right, one of the goals in a debate is to help each other ask more questions. Out of all the debates I’ve been in, I’ve never ever ever had anyone concede right then and there. In a debate, look at it as if you were trying to sow your seeds, not pull out their weeds. You won the debate if the person walks away with questions to answer for themselves. Aggressive tactics may cause your opponent to anchor down and become even more ignorant about their views on tithing.

Some people like to debate and some don’t. Please don’t judge those who do. Any debate can be nurture growth or it can nurture animosity. God said iron sharpens iron, so don’t be a pansy and assume God meant to say a puffy polishing cloth sharpens iron. Sorry to say that to you anti-debaters. For the rest of you, just remember that your testimony is equally as important as the truth of God’s word.