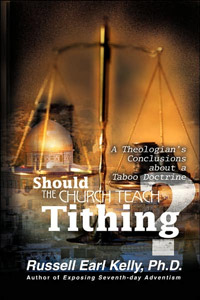 I’ve been meaning to write about “Should the Church Teach Tithing” for some time now, but haven’t gotten to it. It’s one of the very first books i’ve read about the tithing debate. The writer, Russell Earl Kelly has a PH.D. and I believe for his doctoral dissertation he researched and wrote about this subject. The book itself is 288 pages and refutes many of the common tithing arguments mentioned by the contemporary Church.

Many people look at those who oppose the tithe as someone who just wants to be rebellious and go against God’s word. But I have corresponded with Mr. Kelly a few times and know that his heart is in tune with God and his Spirit. I am on board with Mr. Kelly’s thoughts and support his writings on the tithe issue. Mr. Kelly’s in-depth thoughts on this subject show that he is a very smart man. I quote him many times in my own writings.

This book is a deep read for most people. I had to read through it slowly in order to understand what was being said. Overall the read is very rewarding and is one of the best books out there refuting the demand for tithing. For anyone who is beginning to study the subject of tithing i would always recommend this book. If i were to give this book a star rating i would give it a 9 out of ten. I would give one more star, but as i said, this book seems more for the deep theologically minded person and lacks personal applications and challenges, as well as down to earth discussion. (Sorry Mr. Kelly :) )