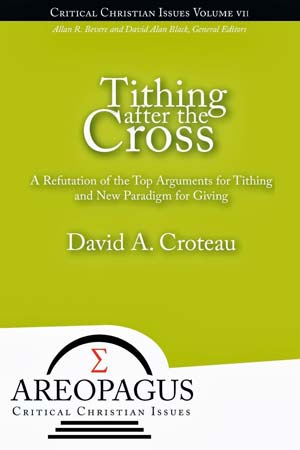 About 1 1/2 years ago I was contacted by an old professor of mine, Dr. David Alan Black, and he requested that I write a book for the new publishing company he had become an editor for: Energion Publications. Specifically, he wanted me to write in the Areopagus Critical Christian Issues series on the topic of tithing. As some of you might be aware, I have published two scholarly articles on tithing (co-written with Dr. Andreas Kostenberger: part 1 andpart 2), a lengthy monograph called You Mean I Don’t Have to Tithe?, and a four views book called Perspectives on Tithing. So, why did I agree to write another book on this topic?

First, the monograph is very long, somewhat technical, though very documented. While there are over 1800 footnotes to support the research in You Mean I Don’t Have to Tithe?, some people have found the prose too technical, the length too overwhelming, and the price too high (it’s about $39 on amazon.com). It contains most of my thoughts on the subject, but it can be a little overwhelming.

Second, the chapter I wrote in Perspectives on Tithing is very limited. To go from over 300 pages to about 30 was a difficult task. I had to edit out so many thoughts that it made the argument less than convincing for some.

Third, while the monograph has almost all the content of this new book, Tithing After the Cross, the structure of this new book makes it an easy resource. See, the monograph is an inductive study on the issue, beginning with church history, then going through both the Old and New Testaments, and then theological systems. The new book is structured around the specific arguments for the continuation of tithing. So there are five categories of arguments: 1) Old Testament Arguments, 2) New Testament Arguments, 3) Theological Arguments, 4) Historical Arguments, and 5) Experiential Arguments. The arguments for tithing are discussed in order from weakest to strongest in each chapter. About 20 specific arguments for the continuation of tithing are explicitly addressed. The book ends with a summary of principles for giving in the New Covenant. So, if there is a particular argument for tithing that you want to research and/or understand, you can easily access it in this book. Also, having ruminated on the topic for over a decade, my thoughts are a little more precise and nuanced.

Fourth, this book was not written in scholar-ese. I attempted to make it understandable to lay people, not just pastors and scholars. It’s under 100 pages in total length.

Fifth, this book is the most affordable. Right now amazon has the paperback on sale for $8.99 and the Kindle version for only $2.99. Now people won’t have to take money away from their tithe in order to afford the book … I’m just joking!

What are my basic conclusions? The idea that Christians are required to give at least 10% of their income is completely and totally unfounded based upon the explicit teaching of Scripture, church history, and systematic theology. The Old Testament Law never required 10% of income; the New Testament never commands it either. The key lies in a correct definition of the tithe in the Old Testament Mosaic Law. However, I am not arguing that the Mosaic Law was bad; I am not arguing that just because it’s in the Old Testament it is irrelevant. I am arguing that the tithe has been fulfilled by Jesus Christ and therefore its application must, of necessity, change.

One of the problems with teaching against a 10% model is the danger of deconstructing a paradigm without replacing it with something. So in the final chapter of Tithing After the Cross I try to provide the exegetical data necessary to teach biblical principles of giving. This is by far my most direct attack on the tithing dogma. I have tried to stay irenic, but leave no one confused: the idea of a required 10% contribution for Christians is not taught in Scripture. However, generous and sacrificial giving is taught.