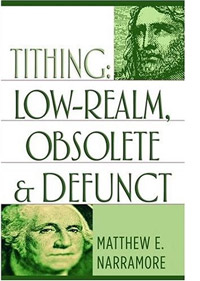 I just finished the book, “Tithing: Low-Realm, Obsolete & Defunct” by Matthew E. Narramore. Overall this was a good and informative book. After you’ve read so many books and heard so many sermons on tithing that you hear so much of the same expository notes. But there were some new insights in this book, as well as some old insights that were said well.

What Narramore says about tithing, in that it is low realm obsolete and defunct is in principle saying what pro tithers themselves have been saying but not admitting. What do I mean tithers “say” that tithing is low realm? Well, considering they claim that tithing is for new believers to start at, then I would assume that their opinion is that tithing is low realm for a majority of people. If a majority of people cannot be governed by a tithe, then why make it a stepping stone into the financial courts of stewardship? When tithing was introduced to Israel in the law it wasn’t introduced as a beginner’s course.

So enough about Israel and the law. What About Abraham? Here’s are some things about what Narramore had to say:

Narramore had mentioned more than this, but i thought these were the strongest points. I enjoyed the overall tone of Narramore’s book. It really focused on Spirit-led giving. I guess first of all it broke down tithing and then topped it off in the end with how Spirit-led giving should replace these low-realm, obsolete, and defunct standards of giving.

Another portion of Narramore’s book says this,

“Sons of God have the nature of their Father. They also share his objectives. They live to accomplish his desires, not something separate of their own. That is why they don’t need laws, rules, and principles of giving. They don’t need a standard of 10 percent because they have already committed 100 Percent. . . They aren’t locked into a mindless routine like tithing because they have the Spirit of God in them who is greater and wiser than any generic system of giving. . . Children and servants cannot live like sons. . . [servants] they have to be told what to do. They have to be regulated and monitored by others. They must have laws to direct them and punishments to reprove them. They must have rewards to motivate them. They haven’t internalized the family objective so they have to be treated as hirelings.

That was said so well, so what more could I add? Matthew Narramore truly understands the spiritual implications of tithing. Once the spiritual deficiencies of tithing have been enlightened in someone’s eyes, there is no turning back to tithing. You received the same feeling when you converted to Christ. It was almost a feeling of, “Oh! Now i see!” Once you get that revelation in your mind, there is no possible way you can reject it. You also begin to wonder how you never saw this before. Here’s another excerpt to explain it more:

“Sons of God have the same relationship to the Father that Jesus has. Since tithing is not part of Jesus’ relationship, now that he has been resurrected, it is not part of their relationship. Since they are one with Jesus, they don’t tithe to him either. They are joint owners of all things together with Christ by their spiritual union. Tithing was ordained for a different kind of relationship with God-not for sons.

Wherefore thou art no more a servant, but a son; and if a son, then an heir of God through Christ. (Galatians 4:7)

And if children, then heirs; heirs of God, and joint-heirs with Christ; (Romans 8:17)

I have one more quote that i will put here but i want to emphasize that we are joint owners, and we have the same spiritual union with God as Jesus His Son. So how does profound relationship with God effect our giving to Him? I believe our giving should reflect the same way that Jesus Christ gave of himself. Here’s the last quote:

“Christians will be immature as long as they are kept under laws. Following laws will keep them from learning how to follow the leading of the Holy Spirit. In order for them to grow up, someone must take away the carnal things they rely on to direct their lives.”

How can tithing be carnal and immature? Simply because our giving is not governed by the Holy Spirit. Instead it is regulated by the standards of mankind.

Think of tithing as a security blanket for the one giving the tithe and the one receiving the tithe. First, as the one giving the tithe, it is easy to appease the conscience once you’ve reached the mark that your peers are all shooting for as well. Second, for the receiver, it is more comfortable to rely on a consistent amount of income. You don’t have to worry about the Spirit calling people to give elsewhere. All you have have to do is make sure they understand that tithing is a minimum requirement and there you have a stable offering to budget from. After all who really lives by faith anyways?

So the book is called, “Tithing: Low Realm, Obsolete, & Defunct”. You can purchase it at the website here. What are your thoughts on Matthew E. Narramore’s book?