You are here: Home / Tithing / Barna Takes a Stand Against Tithing 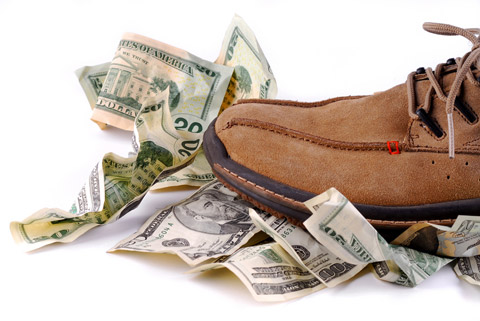 The Barna Group just released some new statistics on tithing and donations for 2007. – here. Interestingly enough George Barna takes a stand against tithing as a legitimate practice in the New Testament Church. This is all kind of exciting to me, because i’m in the middle of reading the book, “Pagan Christianity” by Frank Viola and George Barna. I am about two-thirds of the way through and i can’t seem to put the book down. I will write a post about that when i’m finished it, but i just mentioned it because i had just finished up the chapter on “tithing”. Ironic. . . i guess.

I just want to highlight some things that were said:

“Whether they believe in the principle of tithing or not, few Americans give away that much money.”

I would like to point out that greed is not biased to non-tithers. I’ve heard many a times that Tithing is an antidote for greed. The reason why tithing does not over come greed is because tithing is not the master of greed. A pure heart, that is undefiled and led by the Spirit of God is the master of greed. Tithing has no power over sin, but the Spirit does. This is confirmed because although Israel had tithing completely spelled out for them, they still had to overcome their greedy hearts. Also regardless of whether our giving is plainly spelled out for us through tithing or is an unpredictable factor through spirit-led giving, we still have to listen and obey. In other words, just because how much we should give is written in black and white compared to Spirit led giving, which is not; we still have to put down our selfishness and obey one or the other.

“Strangely, tithing is a Jewish practice, not a Christian principle espoused in the New Testament. The idea of a tithe – which literally means one-tenth or the tenth part – originated as the tax that Israelites paid from the produce of the land to support the priestly tribe (the Levites), to fund Jewish religious festivals, and to help the poor. The ministry of Jesus Christ, however, brought an end to adherence to many of the ceremonial codes that were fundamental to the Jewish faith. Tithing was such a casualty. Since the first-century, Christians have believed in generous giving, but have not been under any obligation to contribute a specific percentage of their income.”

Many people are blinded to the point where they view tithing as a “principle” not a “practice”. George Barna said it right, “tithing is a Jewish practice, not a Christian principle”. There are 2 practices that come to mind when thinking about the Church. One, Baptism, and Two, the Lord’s Supper. Tithing is not one of them, nor is it a principle. I’ve said this so many times- tithing is a standard, not a principle. In the old testament we see Abraham as the first person recorded to tithe. But we are not commanded to follow Abraham’s actions, we are commanded to follow his faith.

Barna also mentions the 3 functions of the tithe. Support the Levites, fund Jewish religious festivals, and to help the poor. At this point i see the Church doing a good job of fulfilling one out of three of those tasks. That’s if you want to equate support of the levites with support of those who are ministering. If we were busy trying to build God’s kingdom instead of our own kingdom, i think we would be doing a much better job with fulfilling the other functions of the tithe (not that i want the tithe and all it’s purposes incorporated into the Church). Just hypothetically speaking.

I find this statistic very, very interesting indeed. This is saying that for the first five years since 2000 that of all the donations given, 84% of them were given to Church organizations, but since the past three years, only 76% of the total donations had been given to Church organizations. So people have been giving 8% less to their churches and giving it to some other organization. I don’t know, to me, that is a big jump. Think about it this way, imagine if 8 out of 100 people stopped giving the money to their church and instead gave it to the Red Cross. Hmmm, very interesting. Maybe a little wake up call for our greedy Church budgets. You can read more about my thoughts on the house church movement and its effect on Church budgets

That was a part of Barna’s interpretation of what the statistics are telling him. And i agree.